Recently, I have had several questions about intelligence in children with cerebral palsy and other early neurologic injuries or diseases. The key issue is whether or not you believe that “smarts” are a fixed characteristic or a trainable skill. 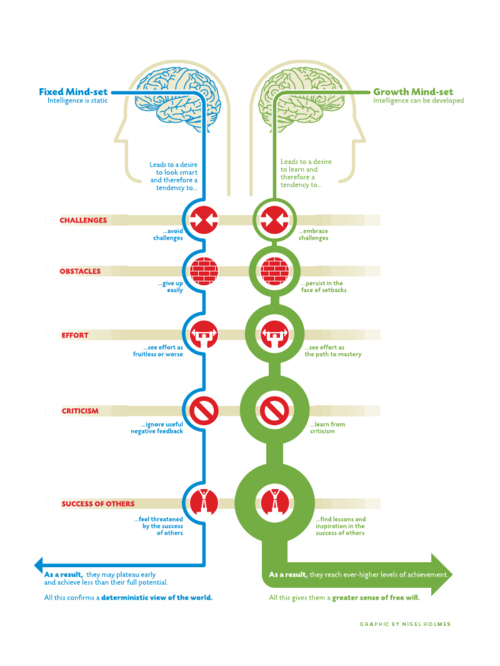 This image, by Nigel Holmes encapsulates the key differences between a fixed or a growth mindset. I have written about Mindset, Carol Dweck’s important book before. Your expectations influence your own life and also limit or enlarge your child’s potential. Three years ago, I wrote about a completely unethical research study done back in the early days of intelligence testing. It was discussed in an undergraduate psychology course on motivation. In the study, children moving to middle school were IQ tested and then assigned into different classrooms based on the results. Parents and teachers were told that the children in Group 1 were super smart and the children in Group 2 were average or below. Not surprisingly, Group 1 aced the year-end tests, while Group 2 did not.

Here is the unethical part…the children’s placement had nothing to do with the IQ test results! Group 1 was created from all the low performing, behavior problem children. Group 2 was made up of high performing, well behaved children. The experimental variable that changed was the parental and teacher expectation of ability. Group 1 children responded to the challenge and improved on all fronts. Group 2 children lived down to the low expectations of their teachers. (How Smart is your Child?)

Carol Dweck’s work is inspirational and leads to positive interventions that make a difference to functional outcome. What is true for intelligence in the able bodied child, is true for the child with an early neurological problem as well. I have written before on the overall improvement of measurable intelligence in children born with Down’s syndrome that reflects a change in societal and parental expectations…the basic chromosomal defect has not changed. (Change Your Expectation, Change the Outcome)

If a child is behind in social interaction, speech or language skills, you really only have three options. The first option is that you can accept the prognosis that the damage is permanent and irreversible and set low expectations. In my experience, this guarantees a poor outcome. Children are adept at living up or down to our expectations.

The second option is to try to treat him “normally”, what ever that means. The problem with trying to normalize your interaction is that the child’s response is not normal. Life with your child becomes a saga of failure to be “Normal”.

A third option…taught to me by a very bright and committed mother is a willing suspension of disbelief. Her daughter was very severely involved in both motor and cognitive skills. As a baby, it was hard to even know if she was responding to the world around her. This Mother decided that her child was a super bright being, trapped inside a body that could not respond. This choice of “Mindset” totally changed her interaction with her child. She chose to believe that her little baby would grow and learn and enjoy whatever life provided for her.

The book, “Melanie – Bird with a Broken Wing by Beth Harry, Ph.D. is written by one of the mothers that turned me into the physician I am today. Every time I meet a family dealing with an impossible situation, I remember Melanie and what her too short life taught me. (http://www.amazon.com/Melanie-Bird-Broken-Wing-Mothers/dp/1598571133)

I have copied the mindset image at the top of this post and will refer to it as suggested by Milisa Burns in her blog. http://milisaburns.com/2014/01/20/a-growth-mindset-why-we-all-need-one/ I consider myself to be at the optimistic end of the human spectrum, but it is good to remember that challenge is just an opportunity to grow.

You can purchase “Mindset” products, including this image on a mousepad, at http://www.zazzle.com/mindsetworks