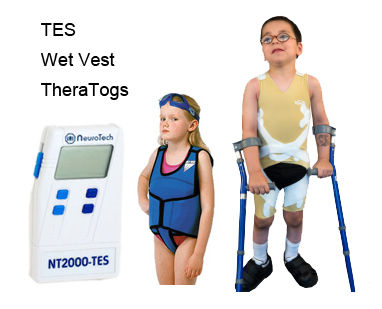 A proportion of children with neonatal encephalopathy have damage to the brainstem nuclei and/or cerebellar damage. Depending upon the extent and site of damage, the child may have Ataxia, Athetosis or Choreoathetosis. The site(s) of brain damage in this group of movement disorders can be quite variable, but the common denominator is muscle weakness and poor proprioception. Proprioception is your awareness of where you are in space. It is the sum total of input from all sensory organs that is integrated in the brainstem and cerebellum and sent on to the cortex.

This previous post (Athetosis and Choreoathetosis) describes the brain pathology and presentation of athetosis and choreoathetosis and a before and after video demonstrates the effect of improved muscle awareness and strength using low-level electrical stimulation, at night, during sleep. This infant had a major change in motor function after only 8 months of Threshold Electrical Stimulation (TES) to the trunk muscles.

In the older child, the uncontrolled movements often become even more erratic and difficult to control. Just as spasticity changes over time, the involuntary movements also increase as the child moves against gravity. They are rare under 6-12 months and some do not become obvious until 2-3 years. It is almost as if their brains are exaggerating the body movements to increase the amount of feedback. Anything that increases the core stability, giving the child more awareness, helps. In this previous post (Quick Fixes – Take Your Therapist’s Hands Home with You), you can see a dramatic change in number and severity of large athetoid movements with a TheraTogs compression garment.

Deep water jogging is another very effective intervention. When this child was first put in the water with a Wet Vest flotation device, she could only manage to stay upright for a few seconds. She gradually learned how to move in the water and discovered, for the first time, the joy of moving freely. The out of gravity experience in the water compensated for her muscle weakness. As she improved, she became stronger and developed more cardiovascular fitness. Better breath control improved her speech as well. Being immersed in the water gave her more information of where her body was in space and the added resistance of the water with movement worked like a compression vest.

Independence for My Daughter

Where To Find It
Threshold Electrical Stimulation (TES)
www.advancedmusclestimulators.com

Further Reading
If you are new to this Blog and have a child with cerebral palsy, I suggest you read the current series, of which this post is number 5. It is important that parents understand the range of diagnoses and impairments in the CP spectrum to better enable you to talk with your therapists and physicians. The goal is to move towards lesion-specific therapies.