This is an ultrasound scan of a premature infant brain. There is damage that looks like holes, on the right side of his brain. Looking at this brain scan, it is reasonable to think that he will have significant problems controlling the left side of his body. 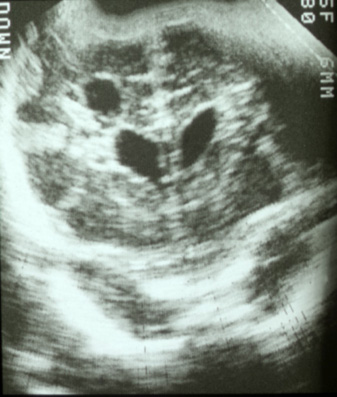 The majority of high-risk infants treated in a modern NICU have some form of brain scan, either an ultrasound scan done at the bedside +/- a CT or MRI in the radiology department. Ultrasound scans for neonates have been available since the late 1970s when I published the first clinical study of neonatal scans in Lancet.

If you had a baby with an abnormality on an early brain scan, when were you told about it?

I would really like to know how this abnormal brain scan was described to you. What were you told that it meant and by whom?

In common practice, if a child has a head injury from falling off a bicycle or from a car accident, significant injury is always confirmed by a brain scan. In my experience in the pediatric ICU, the brain scan is discussed with the family and they are given as much info as the doctors have about the extent of damage. As the children improve, they are automatically discharged to an ongoing rehabilitation program. The focus of the entire healthcare team is to maximize recovery and return to function. What happens with the newborn who has suffered brain damage? Again, in my experience, parents on discharge from the NICU rarely have a specific therapy plan in place for their at-risk child.

At the time of discharge home, were you given any specific instruction to help your baby recover from the documented brain damage?

When did you first start to think that there might be problems with your child’s development?

When and by whom was the diagnosis of CP made?

After the diagnosis was made, at what age did your child start specific cerebral palsy therapy with a physical therapist (PT)?

You can comment below or write me at kep@karenpapemd.com