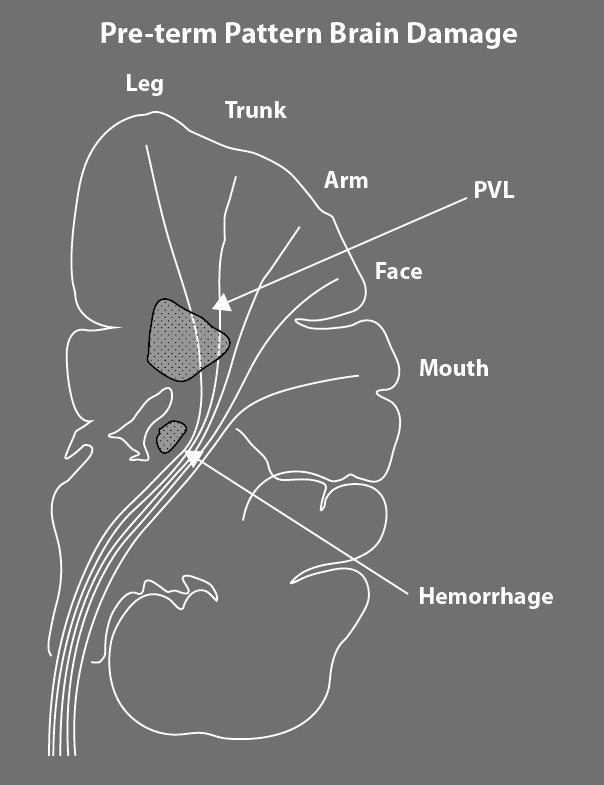 Spastic Diplegia is the most common form of cerebral palsy in children who have been born early. Every once in awhile, a child is born at term and develops typical, preterm pattern diplegia. This usually means that the child’s brain ran into some difficulty in the uterus prior to birth. Overall, diplegia comprises 38 to 40% of all the children with cerebral palsy. The most common cause is bilateral periventricular leukomalacia (PVL) affecting a specific area of the white matter of the brain. The area most at risk is the site of the descending corticospinal tracts carrying messages from the motor strip of the cortex to the body. As you can see in the diagram, the hatched PVL area first affects the fibers coming from the feet and legs. Early in development, this area is a boundary zone between developing arteries that are growing in from the surface of the brain and others that are growing out from the center of the brain. Boundary zones are particularly vulnerable to changes in the blood flow that are common in sick premature babies. Germinal matrix hemorrhage, the common precursor to intraventricular bleeding is also diagrammed. Bleeds from the germinal matrix that extend laterally into the brain also pick off the feet first, but you can see that the corticospinal tracts are much more closely bunched together in this area. This means that even a relatively small hemorrhage may extend enough to cause hemiplegia. But, as I discussed last week, preterm pattern hemiplegia and preterm diplegia both present with an ascending pattern of severity with the most severe involvement around the feet and ankles moving up to the hip.

Over my long career, there have been major changes in the severity of cerebral palsy seen in NICU survivors. Some major problems, like post-kernicterus brainstem damage, are now effectively prevented. Overall, there has been a major decrease in the severity of neurological problems, along with a decrease in associated issues related to being born prematurely. The survival rate is up and the disability rate is down. Yet, traditional thinking is that there is still “no hope” for a cure for cerebral palsy. This is a quote from a book published in 2012 by two noted cerebral palsy experts.

“While there may be no hope for a cure… for cerebral palsy… there is much that can be done to enhance child and family development and well-being.”

I think this is strange! As far as I can figure out, every other pediatric disease or disorder accepts the goal of a cure, no matter how distant that goal may be. Think of Jerry Lewis and muscular dystrophy, brain tumors, autism… the list goes on and on. In terms of my quest for a cure for cerebral palsy, preterm pattern hemiplegia and diplegia are the very best candidates for a quick improvement in outcome. Brain injury in the very immature brain occurs in the areas of the brain that are rapidly growing. The last trimester of pregnancy and the first four years of life are periods of exuberant neuroplasticity and have a great potential for regrowth, repair, reorganization and reallocation of resources.

Up to this point in time, we can attribute most of the improved function of NICU survivors to improvements in Perinatal and NICU care. In the hemiplegia and diplegia categories, severity is definitely down and all but 1 to 2% of children with diplegia are also now expected to walk and score on the GMFCS at levels I to III.

The question now before us is should we rest on our laurels or go for gold? I think parents should be given information about their child’s areas of brain damage as early as possible. Good function needs consistent control of lower limb tone during growth. Children grow to half their adult height in the first 2 to 4 years of life. It seems silly to me to hold off on tone controlling treatments and technologies until the child has finished their first major growth spurt. Every parent of a child with preterm pattern diplegia knows that when the child moves, the legs stiffen, the heels move up and the toes point downwards. This tone, initially “activity dependent”, becomes stronger and stronger and more persistent with each growth spurt. This is the conundrum: cerebral palsy is caused by a non-progressive brain lesion, but the spasticity associated with this brain lesion is progressive with growth.

Fortunately, there are many methods available to manage tone and prevent body distortion, starting with infant massage and stretching to a normal range of motion. Bracing is always needed and there are improved methods now available.

A New Way Of Thinking About AFO’s – Spasticity Series #6

The problem is that the available adjuncts to routinely prescribed physical therapy are rarely used early or continuously until growth is completed in the late teen years.

There seems to be a systematic problem in the allocation of resources. Children with preterm pattern cerebral palsy, both hemiplegia and diplegia, are at the milder end of the severity spectrum. All but 1 to 2% of the children are GMFCS level I to III, which means they all walk. I have traveled the world teaching my approach to rehabilitation and unfortunately, there is a prevalent belief system that children who are mildly affected are “good enough”. In my view, this is wrongheaded thinking and not based on current neuroscience knowledge. It is time for all of us who are involved in the care or upbringing of these children to demand both better services now and on-going research to determine the best ways to achieve significant improvement.

Next week, I will start to tackle quadriplegia, the form of cerebral palsy with all four limbs involved. As ever, I look forward to your questions and comments.

Further Reading:
The “no hope” quote is found on page 112 of Cerebral Palsy: From Diagnosis to Adult Life, by Peter Rosenbaum & Lewis Rosenbloom, Mac Keith Press, 2012

Other posts in this series

First
Too Little Too Late