It is important to distinguish between Preterm and Full-term pattern cerebral palsy. The circles on the stick figures indicate the areas of highest tone in the two conditions. 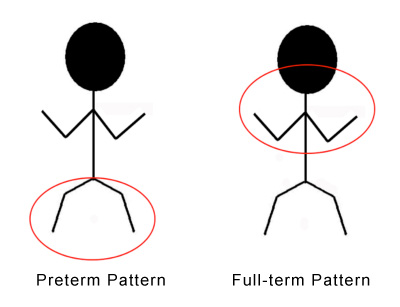 One of the best ways of figuring out which pattern a child has is to look at what happens with new skill learning or moving at speed. The classic pattern for an ex-prem with diplegia would be quite normal hand use when seated in a supported position. However, when the child gets up and starts walking, the hands tighten up. The tone in the lower limbs is more constant in different positions than the variable “activity dependent” tone in the arms.

SDR surgery is most commonly done in children born early. The SDR surgery decreases tone in the legs and for those born early, this is the seat of the problem. The data from Dr. T.S. Park’s unit in St. Louis makes this point.

The preterm advantage is that the damage is predominantly to the periventricular white matter and it occurs during the period of time when there is active brain growth. The last trimester of pregnancy is described as a period of exuberant neuroplasticity. What that means is that the baby brain actually produces many more cells and many more connections than are needed. For this reason, it is in an uniquely advantageous position to compensate for damage. Children with preterm pattern cerebral palsy have less involvement in speech and language, less involvement in the arm and hand, even in the preterm with hemiplegia, and all groups, including quadriplegia, have a lower incidence of seizures. The majority of children that I have followed through to adult life with preterm pattern diplegia or hemiplegia have gotten through all the average years of education and the majority have at least a college degree, if not postgraduate degrees as well. Intelligence is seated in your gray matter and preterm babies have a predominantly white matter lesion.

Over the last 10 to 15 years there has been a definite change in the evolution of spastic diplegia in preterm infants. If they are well managed, with all of the techniques that I have already spoken about in the spasticity series, the ones with mild problems do extraordinarily well. A Rhizotomy is usually not indicated for these children. That is not to say that they will not have continuing problems through childhood growth spurts and puberty, but they usually can be managed reasonably well with Botox only needed during active growth spurts. However, if you are using Botox several times a year, then I suggest a consultation with an active spasticity management clinic. The reality of cerebral palsy spasticity is that it continues to increase in severity with growth.

Spasticity usually does not progress once they have finished growing. The other population of children that qualify for a SDR are mild to moderately involved teenagers who are able to walk, with or without aids and have no, or correctable, biomechanical distortions. Many of these young adults may need both orthopedic and spasticity reduction surgeries. In the older child, the spasticity level is fixed and the teen is able to cooperate with intensive strengthening and retraining of a new way of walking after surgeries. I encourage everyone, parents, teenagers and therapists to start a conversation about life with less tone. The 5-year-old child has at least 12+ more years of growing and an average life expectancy of 80 to 85+ years. Find out the facts from the experts, as they apply to the individual child. Is this child a candidate? What would be the best age and stage to consider a surgical intervention? What will it accomplish? What is required afterwards in rehabilitation? How many surgeries have you done? What are the problems and/or side effects?

My last word is don’t think any one treatment or intervention will be a stand alone answer. The children are still going to need AFO’s until they stop growing. They are still going to have to be strengthened and retrained into a more normal way of walking. I think it is important for parents, in particular, to talk to the spasticity management team. It is hard to make a good decision without knowledge and the surgeons know more about their surgeries. Parents can then weigh the surgical advice with the medical results and make an informed choice that works for their family.