If a teenager has a bad fall off a bike or a significant head injury while playing hockey, the timeline for recovery is very similar to an adult with a stroke. By 3 to 4 years after the injury, a physician can say, with confidence, whether or not there has been a full recovery. I was taught in pediatrics that I could predict the prognosis or outcome for a child with cerebral palsy by age 3 to 4 years. It took me a long time to figure out that this early judgment was wrong in at least 80% of children.

The timeline doctors use to assess recovery in the relatively mature brain of a teenager or an adult with stroke is similar. The first six months after injury are crucial with a rapid return of function in the majority of people with a mild injury. During the next 6 to 12 month period, major improvements are possible but they tend to be at a slightly slower rate than in the first six months. In the second year and through to the third or fourth year, gains are still there but they are slower and require more intense work on the part of the patient and the therapist. Even in an adult with an old deteriorating brain, the 3rd to 4th year period is not the end of possible change, but change is harder to achieve. It usually requires adding a novel, challenging intervention such as Constraint Induced Movement Therapy (CIMT) rather than routine therapy. In adults with a chronic stroke, CIMT has been shown to produce significant improvements in upper limb skills. There is also some early evidence that the improvements are associated with measurable changes on PET scans. (http://www.nature.com/jcbfm/journal/v25/n12/abs/9600158a.html)
The logical error that has occurred in pediatric neurorehabilitation is the application of a three to four-year timeline of recovery to a baby with a growing immature brain. Babies have brain neuroplasticity, but human children also have the advantage of developmental plasticity. It has been estimated that at age 3 years, less than 30% of the adult mature brain is wired and functioning. What we see at age 3 years is the extent of recovery from the primary damage to the corticospinal system. What we do not see is the further improvement that is only possible as the brain matures and all the other systems that contribute to adult motor function come “on-line”. Can you teach a three-year-old how to play tennis or hockey?

In spite of the immaturity of the 3 to 4-year-old brain, all of the literature supports the concept that an accurate prognosis may be given for a child with cerebral palsy at this age. Trying to assign a prognosis earlier is fraught with error as many of the children, initially thought to be damaged, recovered. They demonstrated sufficient baby brain neuroplasticity to fully recover from their injury. For those that do not fully recover, there are numerous studies in the literature that have looked at the child’s severity classification at this age and the results are clear. The majority of children stay at the same level of severity or deteriorate with growth during their teen years.
http://jama.jamanetwork.com/article.aspx?articleid=195300

The problem with these studies is that they are measuring the severity of the child’s early acquired Habits at baseline and they find no change in these early acquired Habits at later follow-up. I interpret these results as excellent proof that “doing more of the same harder” does not produce anything beneficial. I have demonstrated over and over again on this site that Habit Hides Recovery… The child’s early movement patterns are abnormal because they were learned with a damaged, immature brain. Later movement patterns are learned with a recovered, more mature brain and they may be NORMAL.

Christine, shown below, still walks with difficulty as her walking pattern is an early habit and habits are hard to change. With lots of hard work, she now jogs in the water with a perfect four point reciprocal pattern and is learning to move across the tennis court. I may be able to move across the court faster than her, but her forehand volley is better than mine. (see: Adult water exercise results and What is the diagnosis) These photos show the same woman…in the tennis picture, it is hard to think she could have any problem with movement. 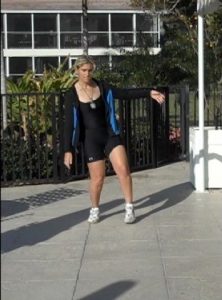 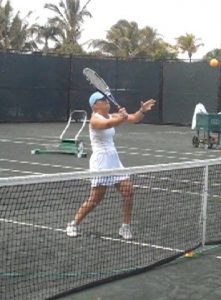 Over the next few months, I am going to be exploring what parents and therapists and doctors can do to limit the severity of early maladaptive or “bad” habits while the brain recovers. This is really the work of the first four years of life. Then we’ll start to talk about how to change established habits. Most of what I’ve learned about changing habits has come from my exposure to excellent coaching in my youth and studying the new information available in the fields of exercise science and kinesiology. Much of what I’m going to discuss is obvious to people who have played competitive sports and received good coaching. Unfortunately, it is news to most health scientists and practitioners.