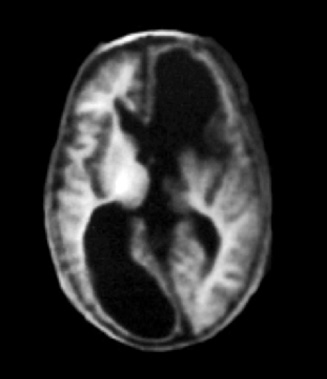 What is the expected outcome in a child with this degree of bilateral brain damage? 1 The vast majority of professionals would say that this child would grow up to have a fairly severe form of cerebral palsy. And that is what countless thousands of parents have been told when their baby has an abnormal brain scan. To hope for recovery after an abnormal brain scan is considered to be False Hope. As two noted CP specialists recently wrote, “While there may be no hope for a cure… there is much that can be done to enhance child and family development and well-being.” 2

I strongly disagree with this position and the neuroscience literature is on my side of the debate. For the first 4 to 6 years of life, baby brains are actively growing and have high levels of neuroplasticity. There is further neuroplasticity throughout childhood and it peaks again in puberty. Harnessing this neuroplasticity is the basis for Real Hope as brains repair, rewire, reallocate and reorganize throughout life.

I did not start out as a neurorehabilitation physician. I started my clinical career as a neonatologist where hope was often all we had, as we tried first to save lives and improve the odds of intact survival. I also worked in Neonatal Follow-up and saw the babies who did not fully recover. Again, in those early years, we had very little more than hope to offer. But I never questioned that my job was to do my very best to improve the condition of all the children throughout their lives. And 40 years later, there are so many evidence-based and best practice techniques and technologies that improve the lives of children with CP and other early brain or nerve problems, that there really is no justification for those who still maintain that there is no hope of a cure.

In my experience, accepting a No Hope outlook has never improved a child’s care.

I look forward to your input on this important topic.