Once the wrist and hand is either able to maintain alignment or is supported in alignment, the next step is to increase the child’s awareness of the hand. This girl is experiencing EMG Triggered Stimulation or ETS to activate wrist and finger extensors. 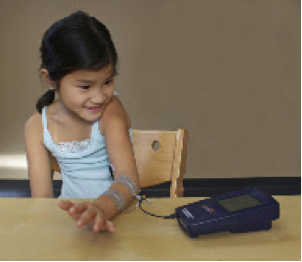 This unit combines a traditional neuromuscular stimulator (NMES) with a surface EMG unit. The surface EMG unit senses and displays muscular activity. Several different types of graphs, as well as an auditory feedback, can display these signals.

EMG biofeedback is widely used in adults for stress reduction, occupational rehabilitation and by athletes wanting to improve their performance by increasing awareness and specific muscle activation. When I ran the Magee Clinic in Toronto, an EMG biofeedback session was part of every new patient evaluation. I found it to be a very useful “aha” moment as children and adults quickly learned to find a muscle and increase its activation. For people who lived near the clinic, we often had them go through a series of EMG biofeedback sessions and in the older teen and adult, there were very good responses with improved function that persisted after the EMG session. Not so much in the younger child.

I worked with an EMG Biofeedback company to develop an integrated unit that uses the EMG signal to trigger a neuromuscular stimulation when the signal reaches a preset threshold. This is a much more effective unit as the child gets to experience a normal muscle activation. It produces a “closed loop” feedback with the child or adult turning on the muscle stimulation with his or her own neural signal. Because the individual initiates the contraction by increasing the EMG signal, less electrical stimulation is required and the muscle contraction is smooth, fused and does not easily fatigue. To get the same response with classic neuromuscular stimulation (NMES), the therapist may need to use 30 mAmp or more. With the ETS unit, the intensities are rarely greater than 15 mAmp, a level that is comfortable even for small children. (http://www.advancedmusclestimulators.com)

The EMG Triggered Stimulation (ETS) technique is widely used for stroke rehabilitation in the Europe. It has been available and used for over 20 years and there is an extensive literature documenting some value, even in chronic stroke patients. (http://stroke.ahajournals.org/content/31/6/1360.full) In spite of this, it is rarely used in North America and even less in children, teenagers and even adults with an early acquired brain or nerve injury. It is quite understandable that it is not widely practiced in the very young child, but that does not mean that it should not be added to the toolbox of therapists dealing with older children and teenagers. It is a constant frustration for me to realize that because it may be difficult to use a technique or technology in a small child, it is virtually never used in a teenager who has completely different brain than the small child.

This brings us to the second peak period of neuroplasticity in the teenage brain. It has been estimated that the teenager gains up to 40% more brainpower during this second peak brain growth period. The most striking change is the maturation, wiring, and activation of the prefrontal cortex. Improved brain imaging techniques have demonstrated the back to front maturation of the brain with the frontal lobes turning on last. (Intensives In Puberty: Take Advantage of Neuroplasticity) During this period, the teenager develops true abstract reasoning and starts to think for himself or herself. This can be a disruptive time for all involved. Knowing that this is a normal process of development can be helpful. A new book by Francis E. Jensen, M.D. titled The Teenage Brain: A Neuroscientist’s Survival Guide to Raising Adolescents and Young Adults is an excellent read, particularly if you are currently surviving teenagers in your house. (http://www.amazon.com/The-Teenage-Brain-Neuroscientists-Adolescents/dp/0062067842)

The maturation of the brain is intimately related to puberty. It would be lovely if they all went through it at the same time, but the truth is very different. Girls go through puberty on average 2 to 4 years earlier than boys and that means that their brain matures faster. Further, the early maturing boy’s brain is very different from the brain of a late maturing boy who may only start to grow and mature at 16 to 18 years. Unfortunately, our school system is totally driven by the ages, not the stages of brain development. For the purposes of hand rehabilitation, the teenager has a completely different brain and we should start again at the beginning with alignment, correcting all the distortions and weaknesses that have developed over the years. However, even with a more mature brain, the teenager is unlikely to be motivated to work on their non-dominant hand unless you create a few “aha” moments to demonstrate that better control is possible. Once the older child or teenager has awareness that the wrist and hand can work, they are much more likely to be interested in doing the work to improve function.

A few years ago, I was teaching a workshop at the Cleveland Clinic and had the chance to try out an ETS unit on a teenage girl with very little use of her affected limb. She was initially shy and quite hesitant to try it, but as soon as she could actually activate her wrist extensors, she was excited and eager to do more. It was interesting that after one session of about 20 repetitions, she was able to activate her wrist extensors on her own. I have had similar responses with teens with BPI. The neuroscience reason for this is that the brain operates on a “use it or lose it” basis. If the hand is progressively less “used” as the child grows into their teen years, the brain map for that hand will grow smaller. Fortunately, using techniques to improve awareness and activation, the brain map can be enlarged and the teen can learn to differentiate the various movements of the hand. The biggest stumbling block to overcome in the rehabilitation of the older person’s hand is building the motivation to try. From their perspective, they have done years of therapy and have not achieved the result they wanted.

The sad, but true fact is that for the older child, teenager and adult with an early-acquired brain or nerve injury, their movement patterns have become habitual. Coaches and athletes know that habits are not broken, but they can be replaced with new ones. Making a new habit is hard work requiring focused, purposeful practice. ETS is an excellent technique that demonstrates a more normal movement pattern in a novel way. Repeated use activates new pathways in the brain and strengthens the muscle. If the alignment issues are addressed, most people can rapidly learn to activate the muscles on their own. Then they have to practice, practice, practice to integrate it into a new habitual movement pattern.

Next week I will discuss a few more advanced techniques for arm and hand rehabilitation. As ever, your comments and questions are welcome.