Many parents, therapists and physicians would consider this boy’s function a therapeutic success. I do not! 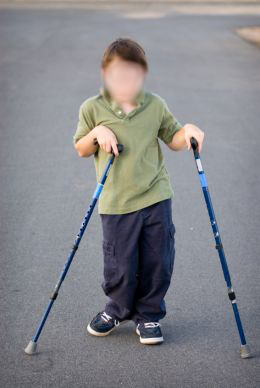 For children in GMFCS III to V, the long term studies have documented that there is an expected deterioration in function as they grow through puberty.1 Even though their brains continue to mature, allowing new function, their bodies develop new or worse distortions. When I look at this boy, I see the potenial for him to lose function.

Much of this can be prevented with age appropriate therapy and spasticity management. The child pictured above is doing well, but look at his hands. Hands held in flexion have a weak grasp as you can see by how he is holding his canes. Even in a child with a very functional hand, this type of wrist weakness leads to poor writing and typing speed that only really becomes evident in the teen years when the academic demands go up. This wrist position, in less functional hands, adds to the difficulty of learning any fine motor task. I suggest parents look back at photos of their child’s hand at earlier ages and see for themselves the slow, but steady loss of alignment and strength. Neuroplasticity and Hands: Doing The Right Thing, At The Right Time, and In The Right Order

Now look at his body and legs. He has increased tone, more on the right than the left. His alignment is pretty good at this point, but again, it will deteriorate as he grows. There are two approaches to discuss with your therapists and physicians and surgeons. The first and most common is a wait and see approach, possibly with a few Botox injections along the way. Then corrective orthopedic surgery when he is bad enough. The data reveals that this will result in a predictable loss in function.

“Insanity: doing the same thing over and over again and expecting different results.”
– Albert Einstein

The other approach is to assess what can be done to mitigate the expected loss of function. The spasticity will not magically go away as he grows. It will only get worse, magnified by body distortion. This is the time to see a good spasticity management team for an evaluation. There are best practice and evidence based interventions that work in both spasticity management and orthopedic surgery.2 Correcting the problems in early puberty makes sense…we know unattended, it will get worse.

Years ago, at the Magee Clinic, I saw a young woman from Northern Ontario who was able to walk slowly with bilateral forarm crutches. She was on her way to Vancouver, British Columbia to have a Selective Posterior Rhizotomy (SDR). I had never heard of doing this surgery so late in life, but when I examined her, I thought it was a good idea. She had had orthopedic surgery in the past and had maintained good body alignment post sugery. But she could not walk far, dress her lower body independently and fought her spastic tone daily, especially in the cold. Winters are long in Northern Ontario.

I was optimistic, but when she walked in to see me post SDR without her crutches, six weeks later, you could have knocked me over with a feather! Her tone was normal and she was stronger. She had done a really rigorous strengthening program post-operatively and it worked.

Since then, I have seen other great results of SDR. In some teenagers with GMFCS Level IV and V, a Baclofen pump has allowed more comfortable posture and function. The older the person and the higher the level of involvement, the more likely it is that orthopedic surgery will be needed as well. The alternative is functional deterioration and musculoskeletal pain. How Much Does It Hurt? Part 2

Each child is a unique individual and parents need to weigh their options carefully. I have no vested interest in a family’s choice for their child, as long as the choices are made from a base of knowledge that includes the long term results of non-action.

As ever, I look forward to your comments and questions.