Three out of every four children with cerebral palsy and the majority with brachial plexus injury have chronic, moderate to severe pain (Level 7-10). In most cases, the pain relates to spasticity and/or distortions in the muscles, tendons or joints. 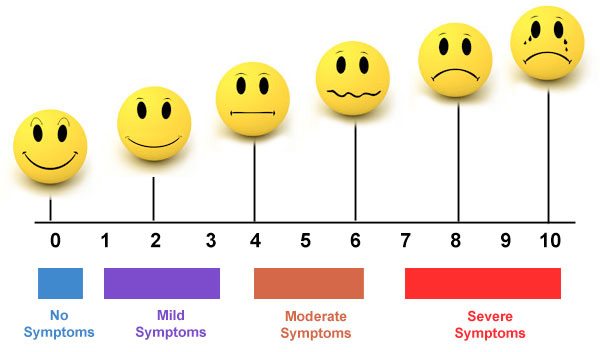 This is the friendliest pediatric pain scale that I could find. In most studies of pain, parents and children report pain differently and often children do not even recognize pain unless they are carefully encouraged to think about it. If the child has always had pain in a joint, neck, back or feet, they often just accept it as being how their body feels. It is their “normal”. This is not really surprising as many have never been without pain.

The first time I realized that children recognize pain differently was when I was involved with a research study using Threshold Electrical Stimulation (TES) for children with Clubfoot. These babies were born with a stiff ankle joint and very weak lower leg muscles. The conventional treatment of serial casting and/or surgery fixed the ankle joint, but the lower leg muscles were still smaller than normal and were weak. We wondered if low-level electrical stimulation at night, during sleep, would help their weakened muscles grow. See this site for more information about Threshold Electrical Stimulation or TES.

At each follow-up visit, the children were asked if they noticed anything new after using the TES unit. The study was going well, but at the 6-month check-up, there was a surprise. More than half the children said their foot had stopped hurting! When asked why they had never complained of foot pain, a common answer was that they didn’t know the foot hurt until the pain went away!

Everything we learn is through experience. To these children, each foot felt different, but it was just accepted that this was the way the foot felt. They had never experienced no pain in the clubfoot. However, once the pain went away, they noticed the change and would complain if it started to hurt again.

The same process happens in children with cerebral palsy and brachial plexus injury as well. I remember one teenager with BPI who told me his affected shoulder and arm did not hurt. So I asked him if he ever had to take an Advil or Tylenol for pain. Sure, he said…but only when it was really bad. When I showed him a pain scale, he started to understand. I asked him first to compare his two sides. His unaffected shoulder and arm were a level 1 all the time and he asked for a pain pill when the BPI side felt like a 7 to 10. On an everyday basis, the BPI side was always different from the other side varying from a 2 on the best days to a 5-6 level by the end of the day!!! It turns out that when asking a child about pain, we have to ask the right questions to get the right answer.

The most common forms of cerebral palsy are associated with increased muscle tone, described as tightness or spasticity. As the child grows, uneven muscle pull gradually shortens the spastic muscles and tendons and distorts the alignment of the joints. Just like a weekend warrior, children with tight, overworked muscles hurt. If their joints are out of alignment, it hurts more. If you doubt what I am saying, try mimicking the way your child walks. After 15-30 minutes walking out of alignment, you will be sore.

Why am I writing this blog at the end of the year? The start of a new year is traditionally a time when we make new resolutions to finally tackle the goals we have let slip over the previous year. This blog is a “wake up call” to parents to really assess whether or not their child has chronic pain. If yes, there are treatments to correct the root cause of the pain as well as effective pain management techniques to use in the interim. I do not believe that any parent would willingly leave a child in pain, but most parents do not even know there is a problem.

Make this the year to change the pain statistics.