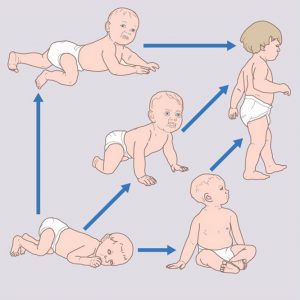 Most babies begin to crawl between the ages of 6 to 10 months. If a child has an early neurologic problem such as cerebral palsy or brachial plexus injury, both doctors and therapists seem to put a lot of emphasis on teaching a child how to crawl. My opinion is quite different. Crawling may be part of a normal sequence of development but it certainly is not necessary for a child to crawl before they walk.

If you look at the occurrence of “normal” developmental milestones in the general population, a significant number of children, estimated to be about 30%, never crawl. These children go straight from sitting to standing, cruising, and then walking. Other children use alternate means of moving independently. Bunny hopping, bottom shuffling and bear walking are commonly seen. It is hard to justify calling “hands and knees” crawling necessary when many children skip the phase entirely.

I was recently asked about commando crawling by a mother of a child with hemiplegia, a type of cerebral palsy that affects one arm and one leg on the same side of the body. She writes, “My 20 month old son has hemiplegia from an inutero stroke. He has been commando crawling for about 9 months now. I see how firmly entrenched this crawling pattern is for him and am searching for ways to help move him toward crawling on all fours. I feel like he is so habituated to move this way that there is little incentive to change to a different pattern.”

This mother is absolutely correct. Her child is habituated to commando crawling. He can do it efficiently to explore his environment and it will be difficult for him to move to the next stage. At age 20 months, children like to take the easy way out whenever possible. The question to ask is whether his particular pattern of commando crawling is a reciprocal commando crawl or is it a belly crawl with less involvement of his hemiplegic side? I suspect that his pattern is not fully reciprocal, as most children with hemiplegia will use the uninvolved side more than the affected side. This produces a “lop-sided” commando crawl. This pattern is bad news, because it means that the child is practicing an abnormal movement pattern. I call this Learning How To Do Bad Better. If he is using both sides of his body reciprocally when commando crawling, then relax because he is practicing a normal pattern. He will get up sooner or later.

For a child with hemiplegia, it really isn’t necessary to get the child to use a four point, hands and knees crawl. All children with hemiplegia eventually walk and the earlier they get into an upright pattern, the better it will be, both for habituating the upright posture and for the normal growth of the leg. Walking on the leg helps the big bones grow. He may well need an AFO for extra support at the ankle, because keeping the foot straight and the weight properly aligned is important.

To get a child upright, I would spend time practicing lifting the upper body, first onto a stair and ultimately up to a couch. Once the child can stand, encourage moving from side to side along the couch. It is perfectly okay to pick him up and stand him against the couch and then encourage side-to-side movement. The goal is to get him to realize how much more he can see and how much easier it is to move in an upright position. Once he can cruise well, get him a weighted push toy that he can push around the house.