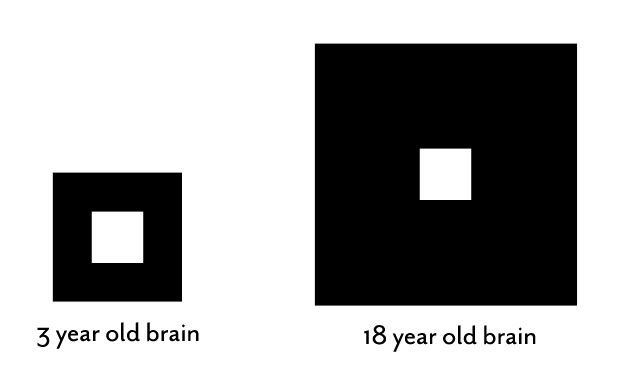 This diagram represents the relative size of a three-year-old brain compared to an 18-year-old brain. I picked a three-year-old brain because this is the age when most children are diagnosed with cerebral palsy. The square hole in the center of the first diagram represents an area of brain damage. It looks pretty big compared to the amount of normal brain. Fifteen years later, after the pubertal brain growth spurt, the brain is a lot bigger and a lot more complex, but the amount of damaged brain remains the same. In the diagram, it looks as if the area of brain damage has shrunk, but if you measure the two squares, they are the same size. The difference is that the child at 18 has a lot more normal brain real estate.

Brain damage in children with cerebral palsy is a time-limited event. Whatever caused the problem – a bleed, a stroke, an infection or a missed bit of early brain development – it is not progressive. The damage is what it is. This means that babies have an enormous advantage and actually more potential for improvement than an adult with a similar amount of brain damage. The damage may stay the same, but the brain keeps growing and maturing.

The title of my book, to be released September 20, 2016, is The Boy Who Could Run But Not Walk: Understanding Neuroplasticity in the Child’s Brain. The title is taken from the common observation that the vast majority of children with hemiplegia can run better than they can walk. You can even measure the difference in a gait lab.1,2 It took me a long time to realize that children with early brain damage learn to walk with a damaged, immature brain, but they learn to run with a recovered, more mature brain.

In the next few weeks, I will write more of what we know about baby brain neuroplasticity, brain recovery, brain maturation, and probably most importantly, how babies and children can rewire their brains using activity-dependent neuroplasticity. I have learned that at each stage of growth and maturation, it is possible to uncover evidence of brain recovery hidden by early-learned habits. It is not rocket science. It just requires a new way of seeing the totality of an individual child’s function.