Cortical Blindness occurs in babies with birth asphyxia, more in full-term than preterm infants. In children, it is an outdated and in many cases, incorrect diagnosis that effectively denies timely and appropriate therapy. The correct term is cerebral or cortical visual impairment.

At a parent group meeting that I recently attended in Ohio, it was brought to my attention that I had not written very much about HIE or hypoxic ischemic encephalopathy. There are a number of posts about Athetosis and Choreoathetosis. As I mentioned in the blog about brain injury in full-term infant, the damage to arterial boundary zones in the brain tend to affect the upper limb, hand, face, mouth, speech and cognition.

Seizures are also more common. Cerebral Palsy in the baby born at term has a very different pattern than the common patterns seen in the preterm infant.  Selective Dorsal Rhizotomy (SDR) in Cerebral Palsy

One of the most immediate and distressing problems is damage to the visual system.

The diagnosis of cortical blindness is initially a clinical diagnosis made by the presence of roving nystagmus. The baby seems unable to hold the eyes still. The eyes move randomly, rolling about aimlessly. Visual Evoked Potentials (VEPs) are a physiological test of visual function that is often used in the NICU if the baby has HIE and abnormal eye movements. What happens next? The diagnosis of cortical blindness, along with its diagnostic code, is put on the baby’s chart. This is fine as a diagnosis at that time, but unfortunately, it is rarely re-evaluated as the baby recovers and matures. Some degree of recovery is expected in the majority of cases. Cortical blindness is a “no treatment” diagnosis. The proper term is cerebral or cortical visual impairment (CVI). The diagnosis of CVI mandates a referral to a teacher of the visually impaired. Unlike cortical blindness, CVI can be treated. As with other interventions, the earlier you start, the better the results. 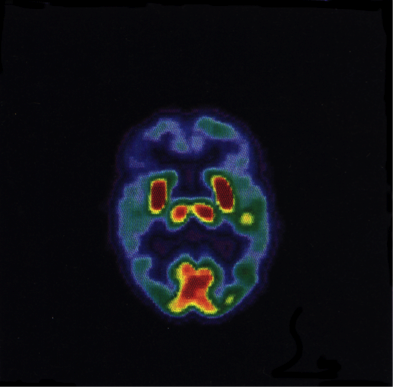 This image is of a functional brain scan of a normal healthy newborn. Active areas light up in the red to yellow spectrum. Blue to gray areas have very little activity and thus lower blood flow. In the normal baby, the areas that light up are in the brainstem nuclei, a small strip of motor cortex and an equally small strip, at the bottom of the slide, at the back of the head, that represents the only part of the visual cortex that is working at the time of birth. This is important because when you have HIE or any other insult to the developing brain, the areas that are damaged are the areas that are the most active. This means that in HIE with CVI, this small area of the visual cortex is the part that is damaged. However, the adult visual cortex represents approximately 40% of our cortical real estate. There is significant post-natal growth of the primary and association visual areas and the baby brain is capable of regrowth of cells, reorganization of the remaining undamaged tissues and even reallocation of other brain resources to “help out” the visual function. 1,2

At the parent meeting, I saw several children who have carried the diagnosis of cortical blindness that were perfectly capable of fixing and following, to some extent, objects put within their line of sight. The focal area of best sight in the recovering visual system is often quite close to the baby’s head and the response is slower than normal. Ellen Mazel, M.Ed. has produced a series of short talks that all therapists, physicians and most importantly parents with a visually impaired child should watch.

Early therapy by a knowledgeable teacher of the visually impaired is crucial. The brain functions on a “Use it or Lose It” paradigm and whatever neuroplastic recovery is possible will only be activated by stimulation and practice. This type of focused practice is not part of the education of early intervention therapists, physical therapists or even occupational therapists, unless they have been specifically trained in visual rehabilitation. Traditionally, specially trained teachers do this work. The experts in the field are the best guide in the direction and pacing of the therapy that has to be instituted as part of daily care of the affected infant.

The teacher will also teach you how to demonstrate residual sight…a necessary first step. Once you get an ophthalmologist to agree that the child has some sight, then parents should get the diagnosis of cortical blindness off their child’s medical record and the more correct CVI diagnosis added. Cortical Blindness is a negative cue that each and every doctor sees, anytime your child is ill. From a parent’s point of view, take the change in diagnosis as the first evidence of some recovery from the HIE.

I found this continuing education for Optometrists document interesting as it differentiates the adult and pediatric problems and emphasizes the potential for more recovery in the child.