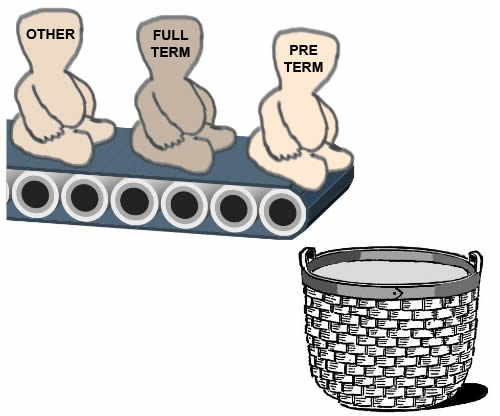 I have some real problems with classifying all children with hemiplegia into one basket. As I explained last week, (Cerebral Palsy – Hemiplegia – GMFCS I to III – Part One) the site and extent of brain damage is largely determined by when the injury or malformation occurred over the timeline of brain development. I grouped children with hemiplegia into three rough categories: Preterm, Full term and Other. They all share predominantly one-sided motor problems, but there are predictable differences in the problems these children face and the types of therapies and interventions that will help them the most.

What are the risks of other sensory or brain problems?

There is a movement within some parts of the CP community to enlarge the very definition of CP to encompass all the possible associated co-morbidities that may occur under one umbrella. One good reason against the continued use of the term CP is beautifully described by Michele Shusterman in her article on Early Developmental Brain Injury (EDBI) that proposes a shift away from using the all-encompassing term of cerebral palsy.

Michele makes a very valid argument that both parents and physicians should be made aware of the potential for damage in parts of the brain that are separate from the motor corticospinal system. I agree. I think that this knowledge has to be part of the diagnostic framework of all of the healthcare team. The most urgent need for this knowledge is the in the hands of those in the NICU or Early Intervention teams that have the responsibility to give parents clear knowledge of their child’s individual risk profile.

In my version of the best possible world, parents would learn early that motor issues help define the risk of other issues. Just as the motor severity can range from mild (GMFCS I) to most severe (GMFCS V), the co-morbidities also have a range of severity. Roughly speaking, the more severe the motor problem, the higher is the risk of other issues. I believe that this risk requires early referral and continued monitoring by specialists in each particular area. The time of the all-knowing physician or therapist has past and seeing all the various problems through the lens of cerebral palsy leads to late and often incorrect diagnosis and treatment.

All children with an Early Developmental Brain Injury (EDBI) should have hearing tests early. With any delay in babbling or speech production, it should be repeated with an expert audiologist. In children with hemiplegia, any hearing loss is likely to be one sided and auditory inattention is more common than speech delay. Just like an adult with one-sided hearing impairment from an injury, the child may show a preference to one side, turning the head to hear better. The hearing testing needs to be repeated as the child goes into noisy environments like pre-school and regular classes. At school age, verbal comprehension should be routinely tested if there are any delays noticed.

Just as in children with preterm pattern diplegia, (Cerebral Palsy – Diplegia – GMFCS I to III) those with hemiplegia may have an issue with auditory processing, but it is often more related to their degree of prematurity than their hemiplegia. Problems are more common in boys than girls and further compounded in many by frequent ear infections.

In children with Full-term or the broad group of Other causes of hemiplegia, hearing and auditory processing problems as well as co-existing speech issues are more common. Screen early and monitor closely. The research data claims that 1 in 4 children with cerebral palsy are non-verbal and 1 in 25 are deaf. Before you panic, realize that this is largely data from registries with widely varying standards of early diagnosis and treatment. Many include children born in the last century. This is a rapidly emerging field of study and treatments. The first step is to push for accurate, comprehensive testing. If your child is older, have a re-test. Much has changed in the last 10 to 15 years as proven by the amblyopia study referenced in the next section.

In the child with preterm pattern hemiplegia, the visual problems are most often myopia and convergence issues. Strabismus, or crossed eye is more directly related to the hemiplegia and requires early treatment in all children with hemiplegia. If one eye is turning in or out, the brain receives an altered input. Our brains do not like seeing double images, one from each eye, and it rapidly suppresses the input from the crossing eye causing amblyopia. In the bad old days, we all thought amblyopia was a permanent problem, but newer research has shown that even well established amblyopia can be improved with brain training.1

Hemianopia, or hemianopsia, is blindness in one half of the visual field affecting both eyes. It is directly related to damage or malformation in the visual system, most often in the occipital cortex. There is a wide range of treatments for this in the adult stroke literature.2 These treatments also exist in the pediatric world, but access is limited. The book on cortical visual impairment by Roman-Lantzy is a valuable resource.3 The key here is to recognize that a short routine eye check is not good enough. These children should see a specialist neuro-ophthalmologist and a developmental optometrist early in life and every 2 to 3 years as they grow and mature.

The risk of seizures in Preterm Pattern diplegia or hemiplegia has not increased over the 1-2% incidence of this problem in the general population. Unfortunately, the risk of seizures is increased in the children with intrauterine, full term or early childhood stroke. In the intrauterine diagnostic category, seizure risk relates to the type and extent of malformed brain tissue. In the full term baby with asphyxia or the young child with stroke, the risk of seizures is higher as the brain is more mature at the time of injury. A pediatric neurologist who has special interest in convulsive disorders should treat all these children, not the local cerebral palsy specialist. The field is changing rapidly and you want the most up to date information and advice.

A couple of important points:

This is one area that really needs to be considered as a separate issue that is impacted by all of the co-morbidities that I have discussed. The more damage there is to the brain, the more likely there will be intellectual difficulties. BUT, these vary from learning difficulties that are common in all babies born early… especially in boys. There are many types of learning difficulties and all are treatable when recognized. It is important to get a full psychometric evaluation by an expert! The outlook is far better now than when I trained in neonatology and in my experience there are a few steps to take to improve it even further.

What therapies and treatments have the most research back up?

Overall, 99% of children with hemiplegia are GMFCS Levels I to III. They will walk, so you need to use whatever is needed to prevent contractures when possible and treat them with spasticity management techniques, orthotics, and orthopedic surgery to ensure good alignment. Again, these journal articles by Iona Novak, “A systematic review of interventions for children with cerebral palsy: state of the evidence” and “Evidence-based diagnosis, health care, and rehabilitation for children with cerebral palsy” 4, 5 are the evidence based and best practice therapies and interventions where there is good enough research data to support their use and insurance coverage. This is the basic stuff you really have to know and understand. I would strongly advise you to bring these citations to your healthcare team and then go over the recommendations to see which ones are right for your child. Remember that the children in my Full term and Other categories are more likely to have sensory processing problems that may complicate the use of AFO’s and hand use improvements unless they are addressed and treated.

This is an incredible resource for parents of a child with cerebral palsy. I highly recommend that you sign up at the CP NOW Foundation to download the The Cerebral Palsy Tool Kit–From Diagnosis to Understanding https://cpnowfoundation.org

The next two posts in this series will go over the Quadriplegia Topography. I hope you will read all the posts in this series as I believe that it is important that you understand both your own child’s risks and issues as well as learn what is not likely to be a risk or issue for your child. Everything has to be put into the context of the individual child so that you can advocate for the right treatments, at the right time and in the right order. After these two posts, my goal for the next series of blogs is to discuss some of the evidence-informed and best practice treatments that we know work in cerebral palsy and put them into the context of the individual child. For example, we know that Selective Dorsal Rhizotomy (SDR) works for some children with diplegia and hemiplegia. But…. if the child is very weak prior to surgery and/or fails to receive good strength and gait training post-operatively, the results will not be as good.

As ever, I look forward to your comments and questions on this blog on my Facebook (www.facebook.com/karenpapemd) or LinkedIn pages (http://ca.linkedin.com/in/karenpapemd)